If you've got EHU, an electric heater should keep you snug and can be left on all night. Perhaps a convector heater may be more comfortable and quieter than a fan heater.
ChrisP 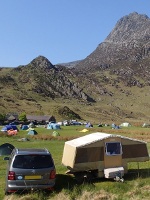 I am probably on once or twice a week. Lots of useful information...sometimes I even manage to contribute something useful myself.

I joined when selling my Dandy Destiny, which ended up going to another forum member in a private sale after a fiasco on ebay. This seems backwards, but was just the way it worked out.

I had the Destiny for 18 months. It got used a lot for weekends, but we only used it twice for a week. My wife is happy to camp for a weekend, maybe even a long weekend, but any longer an she gets frustrated by the clutter that seems to appear everywhere. As a weekender, mostly for my son and I, it was just too big and heavy to put up.

After a few trips in my old Vango tunnel tent, I was missing being able to stand up and ended up with another Dandy. This time a 4/5, because I gave up waiting to find the right 4. The 4/5 really needed a restore, but somehow it was always a case of...oh well it will do one more trip. With a permanently pending restoration, nothing ever got done since it would only get stripped out when the restoration finally came. There was also the worry that any Autumn restoration would not get finished by the next Spring. Since the 4/5 didn't have a Dandy awning, I had a lot of trouble trying to get an alternative to fit well. See the 'Bought a Porch Awning' thread for that saga. The revised plan was to get another Dandy to restore and if it wasn't complete in time, the old one would, as ever, do for another trip.

Today, after bidding and losing on a 'restoration' 4 with inboard wheels (something I really wanted since some sites have narrow gaps in banking or hedges I have to try and get the Dandy through) I secured a nicely turned out Dart or possibly 4. It does not have inboard wheels, but it does have a full Dandy awning and an underfloor heater - no extra insulation though. It was listed as a Dart, but I thought they didn't get names until the blue and white ones, so being brown and white it may be a 4. I will know more when I pick it up later in the week.

I expect to continue to check in once or twice a week and will probably have a few questions regarding the new one. Despite have owned two already, they all have their own little quirks.
Go to page :