Sites we remember are the ones we may not have been to for a while but think they may be worth a look,so wouldnt be fair to review.

This one i remember as a fantastic site so long as you dont use the caravan field,the one for trailer tents and tents runs along the river in hedged bays,if you go without hook up you can be river side if you want hook up its about 50 yards to the river,it does get very busy at weekends and bank holidays because of the kayaking.


[You must be registered and logged in to see this link.]
Helen

Went here about ten years ago, it was a lovely site then but looks to have become even better from the web site.

See the link for details but please note this is now an adults only site.

[You must be registered and logged in to see this link.]
mike

Went here about ten years ago, it was a lovely site then but looks to have become even better from the web site.

See the link for details but please note this is now an adults only site.

This does look like a lovely site i have driven past it many times,its a bit confusing though on there web site they say they take trailer tents but on the sign outside the site the trailer tent symbol is crossed out, so it may be worth saying you have a folding camper when booking.

No good for us with a child but looks really nice, shame its adults only

Another one we havent used for a few years,no reason sometimes you just dont get back to places,nice position in the country side with some nice walks.


[You must be registered and logged in to see this link.]
mike

Just had an email from this site,we where there a couple of years ago for a dandy owners rally,they say the have now done away with the rally field.
It was a lovely site well laid out and very nice toilets and showers.

[You must be registered and logged in to see this link.]
Helen

I wouldn't be fair to do a full review as we did not stay here. The pathways on this site were so steep that you are advised to park your vehicle sideways! We did drive around it and all looks neat and the views are stunning but you would struggle to find a level pitch, driving around the site it appears there are several small fields but access is awful to these camping fields and driving around it in a 4x4 was scary enough for me.

[You must be registered and logged in to see this link.]
Tow Itch

Must be 15 years since I stayed here.
Wonderful site and excellent centre to explore Cornwall and Devon from.
Looking at UK Campsites can't find a negative review.
[You must be registered and logged in to see this link.]
Only negative is the cost. High season Pitch and two adults £27 or £30 if failing in the trailer tent / awning argument.
Tends to get you to look at the ferry or Eurotunnel prices.
European rates of this price tend to be associated with full service parks.
MrsG 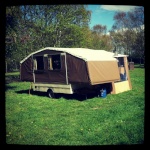 Ben & I used to love nipping [You must be registered and logged in to see this link.] for the weekend when we were first camping....lovely quiet & secluded site, but near to Cheddar/Wookey Hole if you wanted to have a nose around...

Don't think its practical with a Dandy though! The bridge to get to it was only just wide enough for our little Ka!
Tow Itch

I know why I missed out reviewing it because it was run by dreadful people and I lived in hope that they would go bust and someone else would take over.

The Friday that we arrived saw us gathering in the pub at just gone 9.00 pm 21.05 when we got to the bar and asked about food. Oh it finished at 9.00 was the explanation. Bear in mind that this was a party of over 20 people (I can actually count off 22 so it could have been well in excess of twenty. We trudged out alas not very far as the best option seemed to be a nearby chip shop. Returning to the bar the beers were perused and it was enquired where the home brew was. "Oh We've Not Got Round to Brewing Yet this year" I can't remember whether it was the first or second May bank holiday.
The campsite and facilities were functional enough if not especially pretty. The showers were clean although to access some of them involved a trip over a railway footbridge.
It was just the grim unhelping attitude of the owners that clouded everything. There was no original beer in the bar and no great welcome so no great time or money was spent there.
Reaching a culmination on the Sunday when I went to the owners and politely requested the use of an empty 11 gallon keg, as we were barbecuing and such a vessel would be ideal to lift the barbecue. Numerous health and safety reasons were given as to why this was not possible. Even though it was known I was happy to handle barrels and an empty 11 weighs bugger all. I retired and then proceeded to burn as much of the grass as possible with the barbecue. The following day I shook the dust off my feet as we left.

The location of the site and the both picturesque and easy transport (as well as the train there is the quicker and cheaper bus to Caernarfon and the stop is outside the pub) is brilliant we spent a group day out in Caernarfon with no one forced to drive. Now of course you can access the tourist areas of Porthmadog and beyond.

On the 28th of Dec I attended a wedding in Betws-y-coed an on Sat the 29th I travelled north to see what had become of the place. The bar hadnt changed much and still had a late 1970's feel to it though I gather it is much older. It's a big pub and does have a cracking sized family room. the difference was apparent as soon as I stepped up to the bar though. 1 bought in and 4 home brewed live beers but best of all lively and engaging bar staff.
The staff were desperately trying different taxi companies to get a ride home for one old boy who had come down for his lunch. I gather the food is praised both for quality and portion size. Anyway I ended up giving the guy a lift back to Caernarfon. Best example of improvement I can think of. The previous owners wouldn't have given a chuff and I'd have never known.

UK Campsite reviews [You must be registered and logged in to see this link.]

It wouldn't hurt if the site was a couple of quid cheaper but vastly improved by attitude.

* It isn't actually a preserved station because the station building was dismantled in order and with numbered stones but the line contractors used the stone to fill the embankments.


[You must be registered and logged in to see this image.]
navver

This is one I'd love to go back to especially as I so love North Wales. Unfortunately my wife got bitten by loads of flies or something and came up in great big blisters, so she will not go back.

The site is on th side of a hill sloping constantly down to the sea. It has its own private beach, which is pebbles and a launching ramp for boats and is used a lot by boat folks. You can light fires on the beach or walk along it to the pub at Trefor, the next village. There's a pretty little stream runs down to the sea nice for the kids to play in.

The views are wonderful across to Anglesey or behind to and to a big peak behind the site. Click on Nearby on the menu and zoom the map out to see.

The entrance has to be seen to be believed. It is a very narrow gate with a big boulder for a gate post which blocks the entrance. It is also very steep at this point and the caravan must be lined up perfectly to get through. IF you're chicken, the site owner will come and tow you in & out with his 4x4. I made it in at the 2nd attempt but had to reverse back out the first time; up the steep slope out onto a very busy road. Couldn't even open the car door to let the wife out to see me back.

The site is well spread out with lots of little areas, some being sheltered but a high one for the foolhardy with that wonderful sea view. But... beware when the wind comes up.
Helen

Looks lovely, we like North Wales too but got fed up of being flooded, that site's up a hill so we will pay a visit this year ..... probably requiring help to get in

You'll get in fine with the Dandy; it's over a foot narrower than a caravan. Approach the site heading East towards Caernarfon. Swing right over to the wrong side of the road so you go through the gate at the correct angle with the car & trailer in a straight line.
Sponsored content