Hi all, What a great forum. Having been tent campers for years we wanted to upgrade and not having room for a caravan we opted for a dandy. It's a 1980's (Brown and mushroom)4/5 berth, I believe it's like a delta. It came with a pvc awning which I have put up but am slightly concerned about the front as it is only held on by poppers(?). Are they really any good? Also, where is the door?

I've read a bit about adapting a caravan awning and would like to have a go. Does anyone know what size awning I need to start with as it's the wrong time of year to open the dandy and measure it. Any help would be appreciated.
Helen

I adapted a free standing awning to fit to our designer as we had tried a caravan awning and the Dandy just didn't have the height to pull it off.

In fairness i've only put it up once. Am over the moon with the dandy generally, it seems perfect and so well thought out that to be honest i found the awning a bit disappointing. Thought weight was going to be a problem but actually it was easy. It took longer to zip and popper the front in than to erect the whole dandy. (Zips were really stiff despite silicone spray and candle wax.)
naedoot

hope you find it as friendly as I do

lucky you having an awning
Helen

Did you peg the awning at all before putting the front on, this can make zips difficult and the poppers can be a pain. You probably already know that one front pole is longer than the other side but on occasions we have got them wrong and that can make it really hard work.

We always have to move some pegs to get the front on properly, takes us a lot less time now are used to it. The first time took us forever too. We now do the poppers from the centre out and it makes it a bit simpler.

We were really lucky in that the lady I bought it from gave me printed instructions for the awning. Will def try it again properly, thanks for the tip on doing the poppers from the centre. I'm very old school though when it comes to camping, (I have a thing for canvas) and would love a caravan awning. Other than than that the dandy is brilliant.
Helen

The silicone spray worked great on our zips first time but on our daughters it took us a couple of goes with the spray can and zipping them up and down to distribute.
Tow Itch

It came with a pvc awning which I have put up but am slightly concerned about the front as it is only held on by poppers(?). Are they really any good? Also, where is the door?

I'm intrigued when you say held on with poppers.
Brown Dandys went through lots of changes. I believe the early ones did not have the later full width awning they had the same awning as on the green and orange ones. Look [You must be registered and logged in to see this link.] ignore all the cars, might your Dandy awning look like this.
Does the front have two flaps with studs on? Do the poles include two dog legged ones and a curved one?
If so you have an awning like the one on my Green Un. Bad News it's not full width good news it's a LOT easier to put up.
Only straight poles with separate corners? Bungee loops on the two ends of the awning Then you have a later full width awning like here

NB the brown one in the above picture is a six that's why the awning isn't full width.
If you have the older one don't be perturbed if the poppers don't appear to line up between the Dandy and the awning. "Their All Like That Sir".
Went camping two weeks ago the Green Un held up in gale force winds.
Helen's last comment applies if you have the more modern awning! And to some degree with the older one but not the comment about different length poles.
Helen

You learn something new everyday I didn't realise they did a brown/mushroom dandy without a full width awning Kevin, just thought that was the orange and green ones.
Cazz 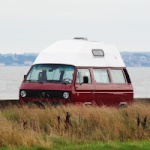 We've had a campervan in one form or other for nearly 10 years now, we also had many styles and types of awning for them in this time. We've also got a 60's Dandy (Green one) with original awning. As we always seem to choose the windiest weeks away in the windiest of locations, lol, we can can confirm that the best awning of all is the Dandy one. All the campervan awnings, except the current one, have not stood up to the wind and have needed repairing.

Also, as the Dandy awning isn't canvas or a synthetic material, when things touch the side when it's wet, water doesn't come in. And of course it doesn't need waterproofing.
Tow Itch

I'll learn to read. By the time brown and mushroom (or white) full width awning. Early all brown some with awnings as per green and orange.
Helen

I still learned something Kevin, I honestly didn't know they did a brown one however early without a full width awning so thankyou. I will store it in my head for future reference ......... plenty of space there

Hello & Welcome! Hope that this will be the first of many posts you make.

I completely agree with Helen. The Dandy awning, complete with poppers, is bomb proof in any weather. Even when caravans around you are having their awnings wrecked by the weather, yours is likely to be still standing. Much of this is courtesy of the pvc canvas being so heavy and strong and the depth of the awning being less than the average caravan attachment. The down side is that the awning is so heavy to put up and not many owners would consider it worthwhile for 'overnighting'. As for doors, well, you've got two. Made up of the left and right hand zips on the front panel. Your version of the awning may well be a 'two piece', comprising front panel plus roof with sides attached. If so this really is a bit of a beast to get over the frame. It can be modified to become a 'four piece' with zip off sides and another few poppers. Ian at Riva Dandy Sales would assist re' price, as would other places like Tent Valeting at Farnworth.

I don't know if you've had the chance to try your unit yet, or how many of you there are using it but the beauty of the Dandy is adaptability. There isn't anything that can't be repaired, changed or altered with a modicum of thought and a little application to suit your personal requirements. By that I mean to make things as easy and comfortable as you want. Happy Dandying and may life never deal you a muddy pitch.

Hi and thanks for all your replies. It's the same as the brown/mushroom one in your photo but is obviously full width on my smaller unit. The front has 2 zips and poppers and odd length poles. Had no probs erecting it or attaching it to the dandy, it's just the poppers that didn't seem to hold. Luvin' it otherwise and am feeling more confident.
Had considered selling it but before you all gasp in horror, it was only a passing thought. Many thanks for all your comments.

The poppers do take a bit of effort, we still find them difficult. they should hold though as the weight of the front section is taken by the frame as it folds over and has more poppers to hold it on.
mike

I know what you mean by where is the door its a design factor that i dont like but will put up with it because the rest of the awning is so good,think helens daughter has a J type zip which gives a kinda door but in all honesty if you dont have a problem erecting it i would stick with it.
Helen

My daughter does have a door on her awning, it's not exactly a J zip but a simple modification that creates a doorway. Keep meaning to get it done on ours too. I will take photo's as soon as she gets the Dandy out again ......... it will be Easter now though. She also has upside down U zips on the awning sides creating lots of doors or zip out panels. I do think you need more than one person to put her awning up though and would personally go for straight zips for the sides if you camp alone.
Krist0n

An awning to begin with would be nice

Thanks again for all your suggestions. It prompted me to get the dandy out again today and "have another go". Actually it seemed better than before and looks the biz when it's up. Definitely starting the poppers from the centre helped, so thanks to Helen. Will certainly stick with it and possibly use my sunncamp handy tent for short stays.
One question though. There are poppers that join the roof to the poles( just before the hooks that attach it to the dandy). When I use these they come undone when I tie the roof in, if you see what I mean. Are they supposed to?
mike

lazydayz wrote:Thanks again for all your suggestions. It prompted me to get the dandy out again today and "have another go". Actually it seemed better than before and looks the biz when it's up. Definitely starting the poppers from the centre helped, so thanks to Helen. Will certainly stick with it and possibly use my sunncamp handy tent for short stays.
One question though. There are poppers that join the roof to the poles( just before the hooks that attach it to the dandy). When I use these they come undone when I tie the roof in, if you see what I mean. Are they supposed to?

No they are supposed to stay together,it used to happen on my delta sometimes but not others,we use a handy tent for short stays.
lazydayz

Thanks mike. You have all managed to convert me to stay with the dandy awning. Can't wait for our first outing.
selkie

We use a light weight porch awning which is useless in the wind, we do have a Dandy awning but sadly none of the poles!

Thank's for the sympathy Mike lol